This amazing home is full of love.

My first night walking around San Salvador with everything I own on my back, unable to find a place to sleep within my budget, I was literally blessed to run into Pastor Mauricio Alexander. Although … I wouldn’t have guessed this man to be a Pastor first glance, he was on a bicycle with a large basket selling his last bags of bread and cookies for 50 cents a bag.

He said he had started his day at 4am.

When we met it was 7pm and already dark out.

This is how we met.

I had gotten to San Salvador just as it was about to be dark. 6pm. I took a taxi to the closest hostel I knew of, talking taxi guys down from 7 dollars to 4 dollars. Had it been just one hour earlier I could have taken a bus, but I would have needed the security of the sun to start such a quest. The taxi driver continued to try to talk me into giving him more money the entire drive, and then just gave me his card and invited me to call him for a ride or go out some time. He was kind enough I told him maybe and assured him I had his number in case I needed anything. He dropped me off at the hostel, getting out of the car to shake my hand politely.
Walking into the hostel I knew it was a 8 dollar a night hostel, I also knew I was going to ask for 6 dollars and see if they would negotiate for 7….. Nope! Instead they started saying the price was $9. Although it was dark out, I knew that where there is one hostel there is another one nearby. So I responded to her price by asking,  where is a cheaper place? lol she kindly pointed me around the corner….

Well I got to the corner and there was three different ways to go!

It was a residential area with hardly anyone on the street. I was quite silly for walking around alone with all my things my first night in San Salvador (Capital City in El Salvador). I asked the first person I saw….
He was pacing back and forth in front of a home wearing a very casual outfit, jeans and T-shirt. He was private security, but from what I’m used to security usually has a more official uniform to say the least.
The man turned around to face me… and that’s when I saw for the first time ever in my life….. this dude had a huge leg sized ak looking like gun. I barely hesitated but figured I’d treat him like a normal person on the street. Asking him where a cheap hostel might be. Seeing the situation clearly he smiled happily.  Showing his half white, half silver teeth, and pointed me down another street. I jokingly made the remark that he looked plenty ready for anything. This is when I really start to feel like a dumbass. Walking around with nobody on the street at night, except the guy with an ak  and silver smile around the corner.
During that moment of feeling like a dumbass, a car drove by. It passed me and then stopped less than ten yards ahead of me in the middle of the street. I had my hand on my pepper spray in my pocket, and was unsure how this would end up. For the first time in all my travels I felt I was in serious danger. But luckily, the car drove off after just a few seconds.

I found one place that said bording house,

and after knocking for a minute outside the barred house, answered a guy who immediatley spoke English . Mr. Bacan, who I could tell was a nice guy, but sure enough horny dude. He told me he grew up in Chicago and told me a bit of his story. He wasn’t in charge and I wasn’t sure of his connection of living there but he asked the Duena of the house about price of accommodation for me. She said 25 dollars, then following my reaction said $12 was the cheapest. Mr. Bacan recommended going around the corner to a place he knew to be cheaper. So I did, and what do you know another 3 way intersection! and I had no idea where the fuck to go.
To my far right was the main street, so I walked in the direction of light and away from quiet streets with nobody.

I found a taco stand,

and asked the taco stand couple where I should go. Not sure what direction to point me in, they asked a man walking by pushing his bike with a large weaved basket. He had been selling his last bit of bread and cookies.
This is where humanity shows itself in the most beautiful way.
He helpfully recommended a place nearby with directions. I gave him a very lost look and told him I’d been asking around, but everything was too expensive. He then said he could walk me there, that he was headed in that direction. I’m sure he went somewhat out of his way to show me what ended up being the hostel I first came to.
When we got to the hostel I explained I had already asked this hostel, and that this hostel was too expensive, but I would have to stay there because I could not walk around lost at night any longer. I was disappointed I could not find a more affordable place, and he could tell. So he explained he had an extra bed in his home.  That I could use this extra bed for the night since that place was too expensive. He explained that he was a man of god, a Christian,  and something about a church.

I know what your thinking Mom,

don’t go into strangers homes at night, in the biggest city of the second murder capital of the world.

But strangely enough,I had no weird feelings and was grateful to accept his offer, explaining he needed to make sure it was okay with his family before hand. He didn’t seem worried but agreed.

After a 20 minute walk up a few small hills, we arrived at what looked to be an average home. He unlocked the bars guarding the front porch and set his bike to rest, and showed me how to unlock the gate.

We walk down what seemed to be a small community down stairs (from outside it looked like a normal home!). There were a more than a few young people in the steep concrete semi outdoor stairway, alongside what seemed to be many very small concrete constructed bedrooms.

Halfway down the stairs,

inside his small bedroom, he explained my situation to his wife, who gave a very serious stare. It looked like she was not ok with his invitation…. She looked at her husband gravely and responded… I could stay….as long as we take a photo together before I leave. I busted out in laughter assuring her OF COURSE! And then comically, she broke her seriousness and we all laughed heartily together!  As well as Señor Mauricio and a couple jóvenes who over heard.

She and Senor Mauricio invited me further down stairs.

There, there were more young people. The duena asked me I was hungry and I said I was alright, until she said something about going to get pupusas down the street for dinner, then I couldn’t say no!
I was invited to walk with two of the young teens Kevin and Nicole to order the pupusas, then we walked back. The large table was full of family and everyone was so incredibly nice!
They invited me to eat with them for dinner, and gave me a very comfortable bed in a room next to their dinning room and bakery. He explained he had church that he had made in his home, and explained he was the pastor of this church and held services here.

I gave a very short and quite awful English lesson to the full table of his family, and he gave me a plate of bread and delicious cheese, and water before the pupusas came to the table.
I felt like I talked a lot though once we were sitting down so to quiet myself down a bit, I went to my room and retrieved some foil from my bag and made the two year old little girl a foil doll, which she immediatly ripped the arms off of. lol.

He said I was always welcomed to his home.

Asking around I figured out non of these young people were his blood children, but children he had been taking care of, most hadn’t spent their whole lives with him and some newer, and some neighbors.

Senor Mauroucio showed me he had a church inside his house, and that the jovens played music and had a band (well two of then from when I asked) he then repeated his belief in god, and then said we are all family and god is love,  this I told him I could not agree more with:) I also told them how I could not be more grateful to this beautiful family inviting me in for the night. He said I was always welcome to return, and I hope to find some way to show how incredibly grateful I am for his kindness, and the friendliness of his amazing family.

they insisted I stay for breakfast as a group of them rolled dough and made Salvadoran baked goodness. Heading out, getting ready to make a long walk to my backup hostel, a new face greeted me and offered to drive me a majority of my distance.

I really had a lot of last minute questions about this home. He explained he lives at this home with his wife and makes breakfast as his contribution. No rent and that Pastor Mauricio makes sure everyone has what they need. He is the ” leader”.

I hope to support this amazing family who took me in, and to support their amazing openness to take care of their community, which has no limit. We are all family, and this home is a practicing example of acceptance and love. I want to support this idea, and such a strong willed family that practices what it preaches, putting no limits on whom they can help.

So much bad shit going on the world, we need more messages of love, thoughtfulness, and care. This family has everything it needs because their hearts are rich. I could not give them any more of this, and thank them for this lesson of kindness and love. 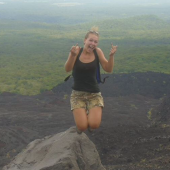 Last day with the fam-bam. New Years in Vientiane, Laos